Social Listening 101: How to Monitor TikTok and Instagram Stories for Mentions of Your Brand

Eswari Vasudevan
Sifting through the noise on social media can be time-consuming and challenging for PR teams at the best of times, especially for those at large organizations with massive social media footprints. But what about when your organization is mentioned on a social media platform you’ve hardly used, or in a social media post set to disappear after a few hours? 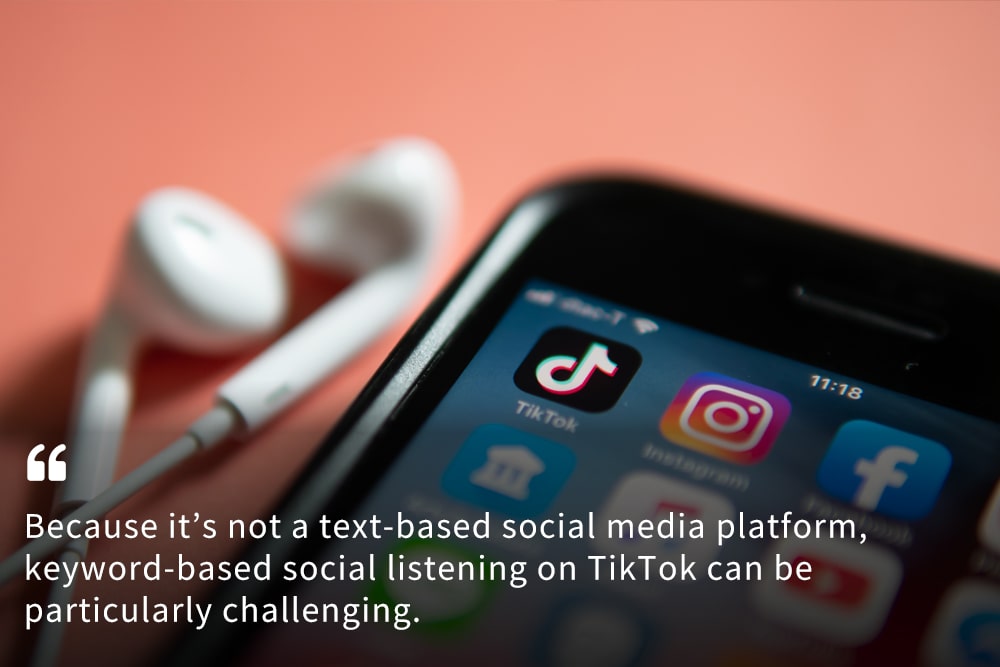 Many large organizations prefer to keep their social listening parameters confined to better-established channels such as Twitter, Instagram, and Facebook. But that’s changing as newer social media platforms become more popular – brands such as Pepsi, Nike, and Chipotle are all on TikTok, for example. The video-driven platform founded in 2016 boasts around 800 million monthly users and is already one of the most downloaded apps of the decade.

And although it has a reputation as a place for frivolous content and dancing videos, it’s quickly becoming more than that – TikTok influencers were credited with driving toy sales in the run-up to the 2020 holiday season, for example. Unsurprisingly, brands are beginning to take notice.

But what’s the best way to track what’s being said on TikTok and other emerging social media platforms (at least without being a Python developer), or in disappearing social media content – especially when they’re not integrated with SaaS social media listening tools?

Tips for monitoring for your brand on TikTok

The most important thing for PR and communications teams to keep in mind when monitoring TikTok is that it begins and ends with short videos. Because it’s not a text-based social media platform  – most video posts are accompanied by very few words, although some users add text overlays and hashtags – keyword-based social listening can be particularly challenging. Even if users do include certain keywords in their posts, we’ve found keyword searching on TikTok to be relatively unreliable.

The platform’s web version (far more likely to be used for media monitoring than the mobile app) also doesn’t consistently sort video content by date in its broad search. In fact, videos aren’t dated or time-stamped at all on TikTok. This can make finding relevant and timely content even more difficult, especially if your team doesn’t monitor the platform religiously each day. Newer videos are easily buried by dozens of older (and more popular) clips, and because of the lack of dates and time stamps, it’s next to impossible to know when something was uploaded short of capturing it the same day.

2. Track your influencers daily. You’ll have to do this manually, but taking 30 minutes each morning can ultimately save you hours of pain trying to find a video from a few months ago.

3. Capture the information and share with stakeholders. Take a screenshot of the post and save it in your preferred media monitoring folder (this also might be a little time-consuming, but is well worth it). You can also upload the content to a hosting server, which then allows your team to create a permanent link to the piece of content that can be shared internally.

Along with newer platforms, disappearing content (also known as ephemeral content) presents another unique set of challenges for PR and communications professionals. Instagram Stories, Facebook Stories, and Snapchat Stories are good examples of this kind of content – although Snapchat is not monitored by companies as often as other platforms because the content often isn’t public or is only shared among a small group. Snapchat’s public stories are available for 90 days.

A similar workflow to TikTok can be used to monitor disappearing content, but with a caveat that it absolutely must be done daily – otherwise, there’s a good chance the content will be lost forever! Instagram Stories vanish after 24 hours (unless they’re added as a highlight). They’re also capped at 15 seconds, but if a user uploads a longer video the platform simply chops it up into several 15-second increments (which can make monitoring this type of content somewhat time-consuming).

Because any monitoring of disappearing content has to be done manually, it’s also advisable to conduct thorough influencer research beforehand. Any other approach risks being bogged down in an avalanche of irrelevant posts – not advisable when monitoring on a deadline.

As with social listening on TikTok, disappearing content on Instagram can be captured in a screenshot and uploaded to a hosting server for storage and sharing. This content can then be used in news briefs or media analysis reports as required. The same goes for Facebook Stories produced by brands or influencers with public pages on that platform.